A few years ago, we were shopping for a set of pots-n-pans to help with our burgeoning cooking habit, and we ended up going with a non-stick calphalon set from Williams and Sonoma. It was on sale that week and we had some gift certs, so we'd be getting a nice set for not much money. Over the past 3 or 4 years since that purchase, the set has served us well - we've used the sauce pan and big saute pan maybe hundreds of times, those two pieces are up for replacement.

When the box containing the set was brought up to the register and our gift cards were strewn all over the counter, we noticed an auxillary box was with our set. "We didn't want to buy that thing," we noted. "Oh, that comes with this set for this week only," came the reply. So we looked at the long, wide, flat box and read what it contained: 16" Paella Pan. And we thought.... "hmmmm... paella!??!?!"

The pan ended up being a great introduction to paella for us - we now make it pretty regularily. We also use the pan for sautéing big orders, like browning 8 or more chicken pieces and large-quantity stuff like that. This is a BIG non-stick pan with a BIG lid... 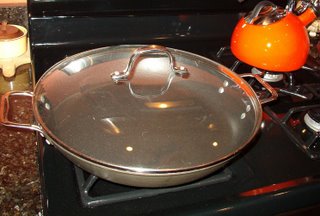 Paella is one of those dishes that is (relatively) easy to make - yet looks, smells, and tastes like a culinary masterpiece. It is a one-pan show, yet includes chicken, veggies, rice, shrimp, and a wonderful browned/burnt crust called Soccorat (spelling?). Originally, paella was the name of the pan that the dish was made in, now they've renamed the pan and left the name paella for the dish!

We procured a variety pack of cut up chicken - 3 wings, 3 drumsticks, 3 thighs - that we salt and peppered and sprinked with a little paprika. When your big pan (paella pan or just the biggest one you got!) is hot, add some olive oil and then add the seasoned chicken and brown on both sides, then remove.

Next, in goes 1/2 a big green pepper and 1/2 a big red pepper chopped up. Get those going for a couple minutes then add a large onion chopped. 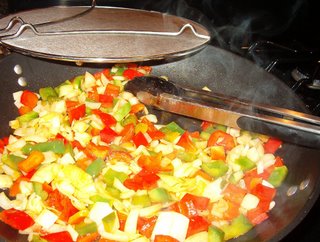 While those are getting cooked - 4 or 5 minutes - slice up some chorizo sausage which is going to add most of the flavor. We use two big links... nicely chopped/shredded. Throw in the chopped chorizo and brown and stir together with the veggies.

Since we use brown rice that takes longer than recommended rice, we started that in chicken stock a side pot and let that have about 20 minutes start on it's own. When the veggies and chorizo are browned, add the rice with the stock into the big pan, nestle the chicken back down in there, cover and cook for about 1/2 hour.

After that 1/2 hour, add about a cup of frozen peas and stir them in, then add in your shrimp in and make sure they are pressed down into the liquid... See how much liquid you have left, if you've got none, add a little. If you have too much, try and use a baster or a ladel to remove some. 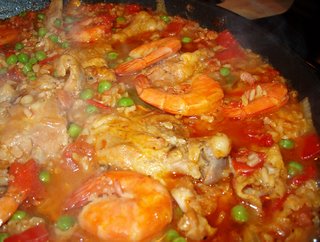 Now, turn up the heat a little and remove the cover to finish. The shrimp will cook in the liquid and the heat will give the rice at the bottom that crusty "soccorat" finish which comes out so carmelized and delicious.

Try to use a big spatula to serve "slices" of the whole mixture, it will come off kind of intact if you have a nice toasted bottom...

Delicious! The tastes of the chorizo and dark-meat chicken and shrimp (next time we're adding clams, too!) mixed with the rice and veggies - so good! Easy but still fantastic!

Paella is one of my favorite things to eat. I've always wanted to get an official paella pan like yours. Yumm, your picture looks delicious!

Lots of pans available at all price ranges from Target and paellapans.com.

There are some direct from Spain in the $25-$100 range at www.buyspain.com

I adore paella and have been thinking of getting a paella pan myself for a while too. Only problem is that I have not seen small ones that can cook for one or two persons! And I eat for like 1/2 a person!

By the way, love the new photo on your profile. You guys are a good-looking couple!

Thanks, Stephanie! We are having family visiting next month and we are thinking of making paella for them (with a salad) because we love it so much and think it is very "presentable". Although we like lots of chorizo, we may make it with less for family members who may not want as much spice - and then grill up some auxillary chorizo for those of us that do..

Get a big paella pan for leftovers! Paella holds up well in the fridge for a few days (except for the shrimp) and makes killer microwave material!

Love your blog, you make great Asian-inspired food... mouths are watering over your crispy duck! To think you're on the other side of the world is amazing! Peace..

I adore your blog. Food and cats, two endlessly fascinating subjects.
The pictures are terrific! What type of camera do you use?
Keep up the good work!

Hey Jaye! Good to see other food lovers in Boston...

We use a very old, very outdated HP Photosmart 620 for our pics. We've had the camera for 3+ years and it is quite the P.O.S. It gets food on it, it gets wet, it gets dropped, it gets sandy at the beach and thrown into bags on vacation - and we don't care because of it's value (none!)...

It doesn't take GREAT close up pics, but it works... the key is to work with lighting and to hold still if you don't use the flash.

Thanks for visiting - see you around the city!