We love shellfish - for the most part. Oddly enough, for a couple of kids from Maine/New England, one of us hates lobster! Mike doesn't eat it at all and has hated it since he was a kid when, at family gatherings in Maine, everyone would have lobster except he and his Grandfather. Burgers for them, lobster for everyone else! Consequently, today we never eat lobster and rarely crab.

Clams, oysters, littlenecks, steamers, mussels, etc. on the other hand... we gobble them down!

We were up in the South End and stopped in Morse Fish Company on Washington - the oldest fish market in New England - so we grabbed a little pouch of steamers and brought them home...

We were going to cook our clams - about 20 steamers - directly on the grill, but then we saw this recipe that steamed them in a pouch on the grill.

20 clams on a big double-sheet of alum foil. Over those; fresh shredded basil, thin sliced lemon, and several pats of butter. Folded up with tight seams, but with enough room for the clams to open up, all except the last end. In that opening, pour about 1/4 cup of chardonnay, then seal up that last end. 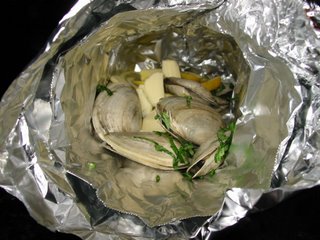 On a medium-hot grill for 8-9 minutes, then carefully open with tongs. Take the clam - with the big beautiful belly! - and wash it in the steam juice in the foil. Then dip in clarified butter* and eat in one big gulp! Delicious! Not sure how much flavor is actually imparted by the other ingredients - it's very subtle - but fresh clams are a treat in themselves! 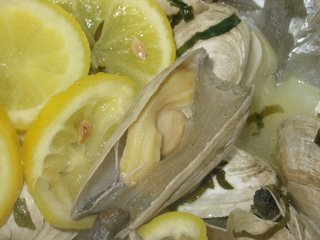 * Slowly heat a stick of unsalted butter til it's gone - the milkfats will sink to the bottom, pour off the clear liquid - that's the good stuff - and get rid of the fats at the bottom..
Posted by Boston Chef at 4:29 PM

Gosh, I envy you getting those. Looks delicious.

But, I swear, as we added the basil and lemon and butter - you could actually hear the steamers saying "wait! butter? lemon??? oh NOOO we're SCREWED!!!"

Haha, just kidding. These guys were so fresh and still very alive and kickin' when they hit the grill to be steamed. They came out so wonderfully tender and tasty, we're gonna steam/grill some shellfish again soon!

mmm, streamers, just had these the other night myself. delicious!