Is our Pasta Puttanesca the real thing? Maybe not, based on some of the recipes we've found online... Truthfully, however, our version sounds better because we make it with chicken and fresh (not canned) tomatoes. Unlike a deep, long-simmered pasta sauce (which we love, but...), our puttanesca recipe is a quick and fresh-tasting version of this famous "whore's pasta". From Wikipedia:

The name originated in Naples after the local women of easy virtue. Puttana means "lady of the night" (i.e. a prostitute), but the reason why the dish gained such a name is debated. One possibility is that the name is a reference to the sauce's hot, spicy flavor and smell. Another is that the dish was offered to prospective customers at a low price to entice them into a house of ill repute. According to chef Jeff Smith of the Frugal Gourmet, its name came from the fact that it was a quick cheap meal that prostitutes could prepare between customers.

Fun! What's better than a dish with a spotty history?

Our version of puttanesca goes down very quickly - we don't start with the sauce until we drop the pasta (whole wheat penne) into the boiling water. The whole dish takes 12 minutes from the time the pasta goes in, so quick is an apt description. Because it all happens so fast, we like to sous everything up before hand:

Water boiling, penne goes in and the timer is set for seven minutes. Chicken chunks get dredged in the seasoned flour - just a very light coating - and then added to a hot pan with olive oil in it. Brown the pieces on the first side (3-4 minutes), then turn over. Squeeze one of those lemon half's worth of juice on there and continue to cook a few minutes. Then add the chopped olives and capers and a couple squirts of anchovy paste - whatever your tastes are - and a couple more squeezes of lemon juice and mix that together. After another minute, add the tomatoes, salt and pepper, and any more lemon juice to taste - and stir to combine.

At this point, the pasta should be done and drained. After two minutes, we're ready to add the pasta and a generous amount of parmesan cheese. Fold all of this together and serve hot! 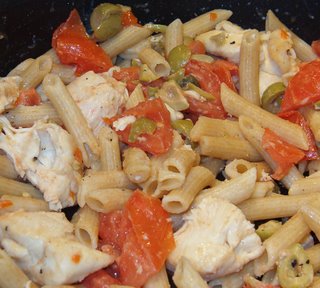 We LOVE the very briney anchovy-and-olive-and-caper flavor of this dish... some people don't, however, and you can easily modify this recipe to your taste. Instead of the capers and anchovy paste, add fresh basil (at the end, with the tomotoes) and mushrooms. Or spinach. Regardless, you'll have a fresh-tasting chicken pasta dish that produces, yup... GREAT LEFTOVERS!

Oh yum!!! That looks great. That's kind of thing I like to eat cold, standing in front of the fridge, late at night. :):)

Hahaha - as a matter of fact, this picture was taken when I was doing just that! (eating it cold later that night...)

In his poems, the poet Catullus talked about women who were "hot" possibly in the sense that they may have had STDs. His word choice suggested he was comparing them to prostitutes because ladies of the evening used to keep warm in the winter by standing near furnaces. So, from my point of view, the pasta puttanescas I've made have been "hot" (or spicy) in reference to those prostitutes.