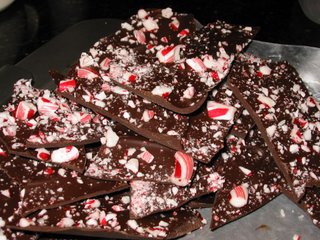 First of all: thanks, Just Braise! We used Just Braise Stacey's recipe as inspiration for our own version of Peppermint Bark because it was so simple and looked so delicious on her site.

Like Stacey, we also hear all about Williams-Sonoma's Peppermint Bark - from my brother singing it's praises to Williams-Sonoma catalogs and stores to it's mention in food blogs... blah, blah, blah! It's $25/pound! For that price, I better be eating some grass-fed, locally-grown, aged beef or a blood-red piece of tuna right off the boat! Even those things aren't $25/pound - and I can't make those at home...

All this recipe takes is a bag of Nestle Chocolatier's Dark Chocolate Chunks ($3.99/10oz), peppermint extract ($3 for a bottle that will last us for many Christmases to come), and a rack of candy canes ($1.99/10). That's it.

First, construct a double boiler out of a sauce pan and a mixing bowl - glass or metal - that just fits down into the sauce pan but is suspended from the bottom. Put an inch or two of hot water in the saucepan and turn the heat on medium-high so it get's simmering and steaming, which will produce the heat necessary to melt the chocolate in the mixing bowl: 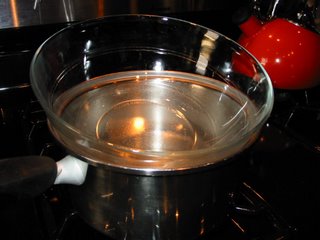 Pour those chocolate chunks in and get to stirring! Add a little capful of peppermint extract as your chocolate is getting smooth and give a taste. Add more peppermint until you have a delicious dark chocolate and peppermint combination... flavor it to your taste. We ended up using maybe two little capfuls. 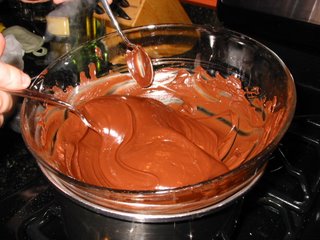 At the same time, drop half of those candy canes in a paper bag - we used five of 'em in the bark and hung the other five on our Christmas Tree, for now - then fold up that bag and head out on the deck with a hammer. Smash those candy canes up good on the deck railing (seemed like a good place to do it) until you have big chunks, little chunks, and even powder. The paper bag won't rip and possibly get some plastic mixed in like a ziplock or plastic shopping bag might.

When you've got nice, smooth chocolate flavored with peppermint to your taste, pour it out onto wax paper that is laid over a cookie sheet and smooth it out into a nice, thin layer - about 1/8" thick - with a spoon. Immediately start spreading around your crushed candy cane... 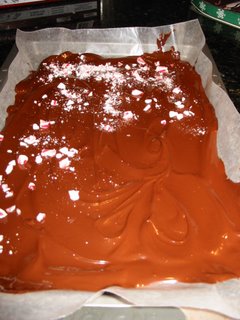 And that's it! Into the fridge for as long as you can stand... we were picking at the edges within a couple of hours. After about 5 hours in the fridge, we took it out and broke it up into large chunks and we were bringing some to our neighbors shortly after that. It came out better than we had even expected, it is crispy and chocolatey and delicious! Enjoy! 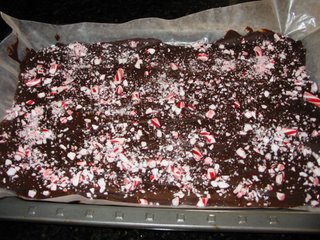 Right on! I attempted a Williams Sonoma version of dark choco bottom and white choco top but once the white went on the dark melted. So it was more like swirled chocolate. Doesn't matter, everyone loved it-- It's too easy!

Refrigerate the dark chocolate until very cold and firm, about 25 minutes, before spreading the white chocolate on top.

I made these and they are very very yummy. I had to use hannaford dark chocolate bars. Thanks so much!!!!