Wow, it's been a while. What can we say - we've been busy. Busy with our new house, busy with weddings, busy with the summer. But also, busy with the new grill and other warm-weather-type cooking! We'll be better, we promise. Until then, here are just a few photos to catch us up...

BBQ-seasoned Pork "country style ribs" with Grilled Zucchini and Mashed Cauliflower... these are those fake, boneless pork "ribs" that you see in the store - I believe they are really just a pork loin cut up in a funny way. Regardless, the way it is cut is perfect for grilling: 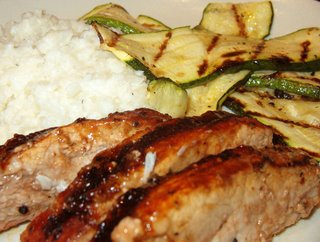 Cajun Grilled Chicken Tenderloins with Fiddleheads and Spaghetti Squash - love spaghetti squash with parmesan cheese, and the fiddleheads are still in season! Finally ran out of our sampler of Penzey's Cajun Seasoning... need more! 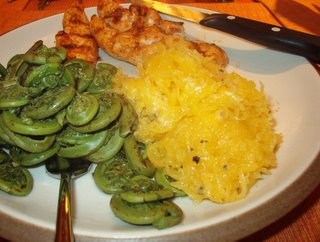 Beer Can Chicken! - hahaha, it came out ok. We put some melted butter and fresh thyme in with the beer and cooked this thing on the grill. Flavor was nothing special - we are so used to brining our chicken at this point that I guess we are spoiled to any chicken that isn't! There is no other way to permeate chicken meat other than brining in some way, a fact of which we are thoroughly convinced. Because there is no fat to melt and carry flavor, you have to get flavor in there yourself. Next time, we'll brine the bird overnight first! Looked good, though!!! 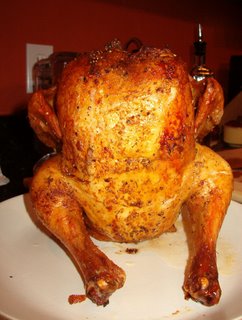 Steak Tips, Collossal Freshwater Shrimp, Artichokes, Red Bell Pepper - All Grilled, of course! - I screwed up the artichokes, but we'll give that another shot. The easiest, best, tastiest grilled thing in the world: 1lb steak tips, in a freezer bag with a store-bought steak seasoning mix, a couple dashes of worchestershire, a dash of liquid smoke, a splash of olive oil, and a little gulp of beer. Roll up the bag TIGHTLY and let it sit for as long as you can stand. Grill for 8-12 total minutes - depending on the size of the tip strips - turning a few times. Cannot go wrong! 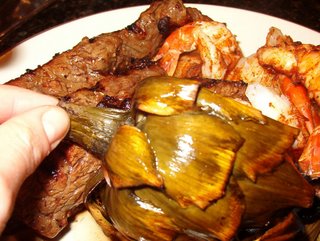 We go to the grocery store now and just look around, trying to think of anything that can go on the grill. Leave us some fun/exotic/interesting grill-item suggestions in the comments and we'll make them and post pics! Thanks and we'll be back again soon...

We had a Memorial Day party on Sunday with friends and neighbors stopping by to celebrate the start of Summer with some cold beverages and hot grilled food!

We covered the Ribs (see previous entry) so now its onto the rest of the spread...

We found a cole slaw recipe that was a supposed bite off of KFC Cole Slaw, so we thought that would be fun. Chopped up one head of cabbage into tiny strips, further chopped up some already-shredded carrots from a package, and chopped up very finely a 1/2 an onion. In a bowl, we combined a couple tbls of sugar, 1/4 cup milk, 1/4 buttermilk (this gave a great soury flavor), 1/2 cup mayonaise (diet? what diet?), a splash of white vinegar, big squeezes of lemon juice (ended up using 1.5 lemons), and good pinches of ground black pepper and kosher salt. In went the cabbage, carrots, and onions - combined very well - and covered and in the fridge. This was still hours away from BBQ time (the ribs had JUST gone on) so all those flavors had a good amount of time to meld into a sweet-and-sour slaw...

THEN we brined the drumsticks. Everyone knows how to do it by now - 8 cups water to 1 cup kosher salt and 1/2 cup sugar (I doubled that because of the sheer number of drumsticks). Also added to the brine: Texas Pete's hot sauce, liquid smoke, crushed bay leaves, and corriander. This sat in the fridge for two hours, then was rinsed well and put BACK in the fridge until they were ready to meet the heat.

Other prep work: peel the easy-peel shrimp (we had about 2 dozen), season them with our Penzey's cajun seasoning, and skewer them up. Cut the peppers into big pieces and oil-and-season them and let them sit. Par-boil the asparagus for 2 minutes, then ice-bath to shock them into submission (SUBMIT, ASPARAGUS!!!), and oil-and-season.

After the ribs appetizer came off (and was eaten), the shrimp appetizer went on next. Stacey did a great job grilling the shrimp while Michael joined the boys playing horseshoes in the back yard. Shrimp were delicious, passed around right on their skewers for people to snack on.

Then we did the peppers, which took maybe 10 or 15 minutes total to get some charred goodness, immediately followed by the drumsticks (which were quickly seasoned with salt, pepper, paprika, and some cajun seasoning). We did a turn-every-10-minutes technique with the chicken, until they were perfectly cooked - crispy on the outside and moist on the inside. I do believe we averaged about 6 drums/person consumption - Impressive! (kidding!)

Not long after that, the asparagus hit the grill and the beer began to hit us... Horseshoes clanked, laughter filled the air, we all ate and drank. Eventually, we cooked up the hot dogs. The neighbors stopped by for some food and a beer and at some point the cards were broken out (of course!)... I won a couple of hands and we ate some yummy Key Lime Pie.

Looking for many more days like this over this summer - Happy Memorial Day! 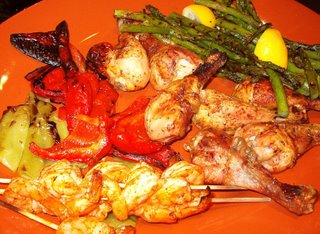 This is how I spent much of the day: 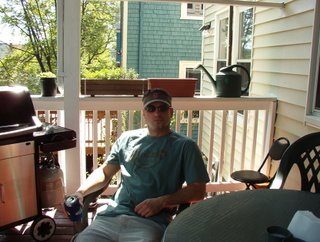 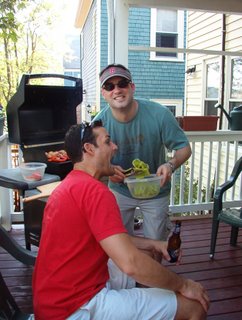 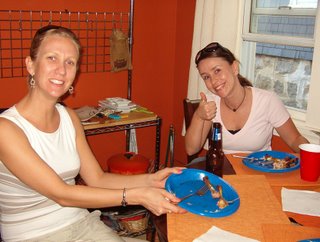