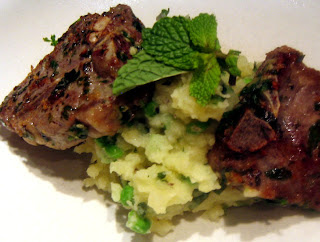 These free range Australian lamb chops were easy - they were tiny little T-bones of lamb loin chops (not shoulder, which is much tougher) which only needed to be pan-sautéed for a couple minutes on each side for to be done medium rare.

After a simple hour-long marinade in olive oil, ground pepper, and fresh mint and parsley - these went into a hot, oiled pan. Three minutes on side A, turn and two minutes on side B and then take them out and let them rest... Make sure your mashed potatoes are ready to go, because this tender, flavorful lamb won't last long after a few minutes rest! And - the only way to eat these was to pick them up and gnaw all the meat off - down to the bone!

I admit that I saw this on 30 Minute Meals avec Rachel Ray. She gets a bad rap, but once and awhile she has very cool recipe ideas - and this was one of them. Simply put some peeled and cubed Yukon Gold potatoes into some cold water, and bring to a boil and cook until fork tender. After draining, in the same pot I melted some butter and sautéed a couple cloves of garlic until soft, then I added some thawed frozen green peas.

After those were warmed through, I put the potatoes back in the pot, added some milk (you could get decadent with cream!), S&P and some chopped up fresh mint and flat-leaf parsley (about 1/2-cup of each) - and mashed it all together with my potato masher! 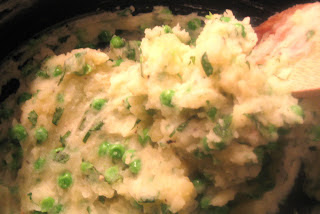 These mashed potatoes had such a Spring-like fresh quality to them, and they went very well with the lamb. Welcome, spring! We're ready! 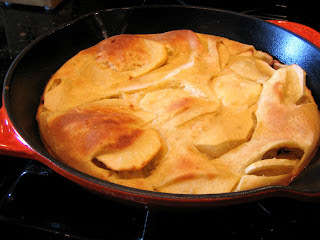 We couldn't believe that we hadn't posted our Puffy, Fluffy, Oven-Baked German Pancake before! This recipe is a favorite of ours going back a few years - a great brunch item, easy to make and VERY tasty. We usually make this oven pancake in a glass baking dish but decided to try the cast iron skillet this time - it didn't really work out (stuck to the bottom, didn't fully "puff") so we'll be using the glass dish going foward. Same exact recipe, but we'd recommend using the glass dish or pie pan.

First, oven goes to 400 degrees. When getting close to being preheated, throw 2 tbls of butter into that glass pie dish and let it preheat in the oven - to get it the butter all melted and everything heated up.

Lightly beat 2 eggs in a bowl, then add 1/2 cup of all-purpose flour, 1/2 cup of milk, and a little pinch of salt. Combine until just smooth. Also, cut up a good baking apple (Golden Delicious, for example) into thin wedges or rounds. 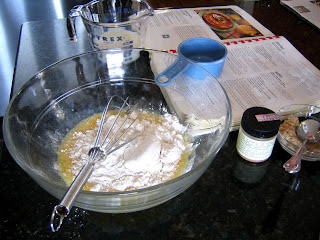 Take the hot pan out - with potholders! - and brush the butter around so it fully coats the dish. Then sprinkle about 2 tbls of brown sugar and some shakes of cinnamon onto the bottom of the dish and lay down your apples in one layer. 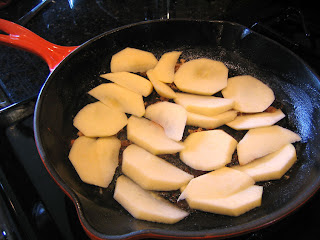 Finally, pour the batter over the apples. 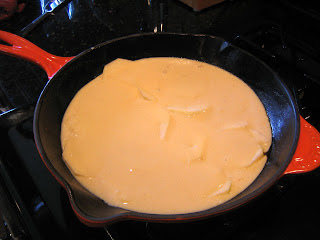 Into the oven for 25 minutes and your puffy and golden brown and delicious! Carefully flip it out and over onto your plate so the brown apple bottom is facing up - a little sweet with the flavor of baked apple... like a pastry! We like ours with an egg over easy and a cup of coffee. 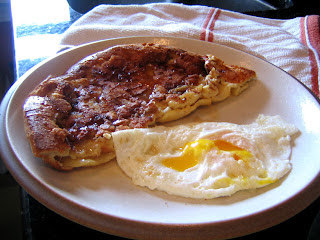 Posted by Boston Chef at 3:35 PM No comments:

Corned Beef and Cabbage and Turnip and Carrot and Potato

Although today is actually St. Patrick's Day, we celebrated along with the rest of the city of Boston yesterday - a day early. We were up having breakfast and watching the Annual St. Patrick's Day Breakfast (it is kind of a political "roast" they have every year in Southie - check out some pics) and then we watched some of the parade - from the comfort of our warm, dry kitchen! It was pretty cold and damp yesterday...

Following a couple of Guinnesses after lunch, we started up our Corned Beef and Cabbage dinner by placing our 4lb flat cut corned beef in our dutch oven, along with a cut-up onion, six garlic cloves, a bunch of peppercorns and corriander and mustard seeds, and bay leaves... and yet another big pint of Guinness Stout. We topped that with cold water and brought it up to a boil, then covered and reduced to a simmer - for 3.5 hours.

Towards the end of that process, we started another pot going - in which to boil our veggies - with water, a big scoop of the cooking liquid from the corned beef pot, some low sodium beef stock powder, more pepper and mustard and corriander. First into that boiling flavored liquid went big turnip chunks, then 5 minutes later carrots, then 10 minutes later potatoes, then 5 minutes later cabbage. After maybe 15 more minutes we were ready to go.

We didn't get many good pics because we dug right in to this tender, flavorful meat too quickly. The flat cut we bought this year didn't have nearly the fat that the point cut from last year had - and we agreed it was MUCH better this way! The meat was still delicious and buttery - without all THAT MUCH fat mixed in. 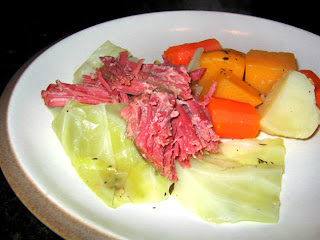 As we ate we decided that - next year - we'll try to corn our own beef brisket! 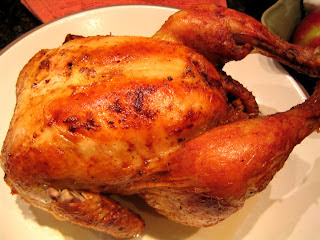 Catching up with a few things while wondering what could be better than the crispy wing tips off a just-roasted chicken...

The beautifully roasted chicken seen here came out perfectly - VERY juicy white meat, buttery dark meat, and yummy crispy skin. We are on the constant hunt for recipes that turn out the perfect roast chicken - as you can see from all our previous attempts. The latest recipe we tried - with much success - was this one from... Molecular Solutions? The recipe is from 1967 Mastering the Art of French Cooking by Julia Child and it involved cooking the chicken on it's sides - which I still can't figure out. However, as they say on their site, if you follow the recipe "the chicken will, indeed, be perfect."

WE WON! WE WON! We won the Cool Beans contest over at Just Braise! We beat the 1-in-8 odds (a 12.5% chance!) and received our prize of a shipment of Cool Beans Dips at our doorstep this week! As you might expect, these were opened immediately and enjoyed with some chips and crackers. These blended, flavored Northern Beans-and-olive oil dips are delicious, they taste just like something we'd blend up in the food processor ourselves. The Hot and Spicy was just that - with a nice spicy kick. The Roasted Garlic had a great mellow roasted garlic and a little salt and lemon flavor - we had this spread on a ham sandwich with yummy results. The Carmelized Onion is the only one we've yet to crack - I don't think we'll hold out long. THANKS to Stacey at Just Braise and the Cool Beans Guys. We see that you can get them at our old grocery store - Foodie's Urban Market - in the South End of Boston on Washington, in addition to many other locations...

We received an email from old friend Jaye at Butta Buns letting us know that there is a Dessert Tasting Fundraiser being held on Saturday, March 29th at the Vietnamese American Community Center in Fields Corner, Dorchester. How can you go wrong when you're raising funds AND having dessert??? Check out her Attention Boston Area Bakers and Dessert Lovers post for more details - we may have to take the T over for some of those Bacon Peanut Butter Muffins she's making!

Finally, we were away for a while in Sunny Rochester, NY visiting with the Brother and Sister-in-Law of Boston Chef. While there, Brother Chef made a yummy Texas-style (no beans!) chili that had great smokey ancho flavor - which we ate over some cornbread. He ALSO made a very nice shrimp-and-chicken pad thai...

But the REAL reason we went was to hang out with our little nephews! Jack made a visit to Boston back in May of 2006, but - as you can see below - he's grown up a little since then. Here he is enjoying his 3rd Birthday Cake! 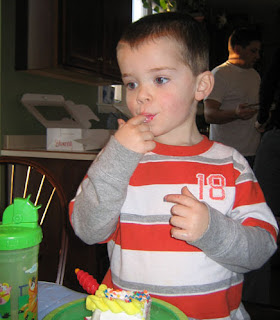 Plus, he's got a new little brother who ALSO enjoys cake - perhaps even moreso!!! 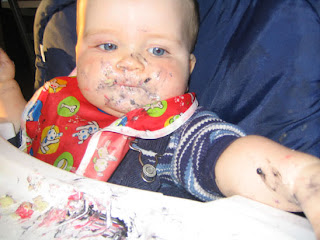 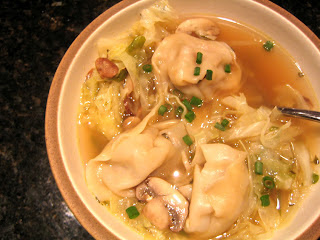 These wontons were delicious and the soup was JUST what the doctor ordered on a cold New England night... plus, we were able to freeze a few dozen wontons for later consumption! We were inspired after seeing the Wonton Soup over at Just Braise.

For the wontons, we cut a wedge of cabbage (maybe 1/8th of the head), about six baby bella mushrooms, 1 peeled carrot, 4 stalks of scallion/green onion, two cloves of garlic, and an inch-long wedge of fresh ginger.... and threw ALL of that into our little mini food processor and chopped them up good. 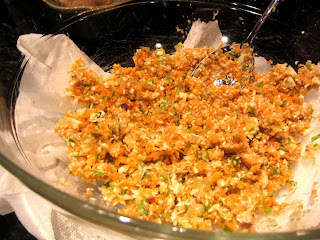 Then, we added those diced veggies to 1lb of ground pork and threw in a couple tablespoons of soy sauce and some liberal sprinkles of crushed red pepper. We folded all of that together until combined.

To make the wontons, we had our refrigerated wonton wrappers, a small bowl of water, a plastic cutting board, and our mixture. Take a wrapper, dip your finger in the water and moisten the four edges, scoop a spoonful of mixture into the middle of the wrapper, fold over and press to seal the edges. Then, indent the bottom and twist around to pinch the edges together with a little more water.

Or, just watch this! 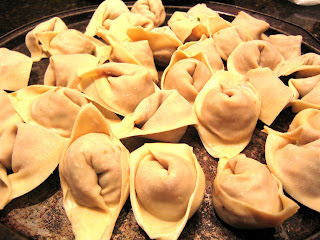 Steam these for 6 minutes and set aside. Then, you can add them back to your near-finished soup to reheat. Next time, we'll probably just boil them in with the soup. Later, dethaw some of the wontons that you froze and pan-fry them! 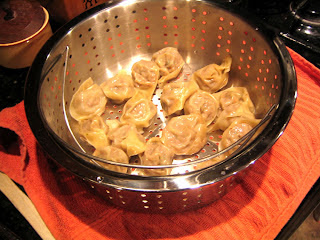 For the soup, we brought about 10cups of chicken and veggie broth to a slow boil and further flavored it with 1tsp dried basil, 1 tbsp reduced sodium soy sauce, 1 tsp Penzey’s Lemon Pepper, 1/8 tsp Chinese 5 Spice, juice of 1 lime and 1 tsp Sriracha. To the broth, I added half a head of shredded green cabbage, 1 bunch of scallions sliced on the diagonal and 7 sliced baby bella mushrooms. 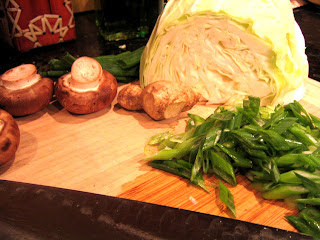 As soon as the cabbage was wilted, and we had added the already cooked wontons to the soup to let them heat through and that was it! Wonderful, and - as usual - even better reheated the next day!