I remember eating dinners in the small kitchen in Lisbon Falls, Maine - six of us around the table in the middle of the room, my Brother and my Father sitting across from my Mom and I, Grandma at one end and Grandpa at the other. The kitchen often smelled like fresh baked bread back then - Grandma was still baking her own in the antique oven - and the old, white cabinets and light linoleum floor and table made the kitchen relatively bright in the otherwise dark, small home.

My Dad grew up in that house and we'd visit twice a year, in the summer to go with the whole family down to Old Orchard Beach, and in the autumn to visit for Thanksgiving. My Brother and I would play with my dad's old vibrating football game or bang tunelessly on the piano in the living room as the adults watched the old television set in the family room. It was a long drive, but we liked going up there... the house had a mysterious quality to it that made it feel adventurous for my brother and me.

Those dinners were a highlight. Typical New England boiled dinner - meat, potatoes, carrots, celery, onions - all boiled until they were all the same soft consistency. My Dad would take all of those items and mash them up together in his bowl until they became "mush" while my brother and I laughed at him goofing around. Grandpa Andy, eating quietly and deliberately at the end of the table, was not as amused.

But our favorite part of dinner may have been the accompaniment of our Grandfather's favorite side dish - cucumber salad. The memory of this concoction has stayed with us years later, and my brother and I have recently breathed new life into the recipe by starting to make it again - just like it used to be made: 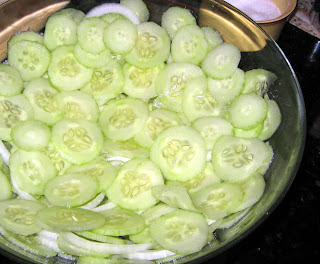 That bowl sits covered at room temperature for an hour for those salt crystals to go to work breaking down the cellular structure of the fresh veggies (I don't know if Grandpa knew that was what was happening - but I know he liked it). After an hour, the cukes and onions are limp and have given off alot of water. We dumped that water out and gave them a rinse or two, then took handfuls of the cukes/onions and squeeeeeeezed all the water out that we could - adding the then-squeezed handfuls to a new bowl, and repeating with another handful until all were drained of their water. 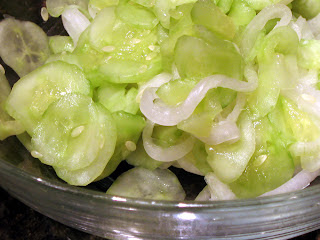 A big TBLS of sugar, ground black pepper, and a couple of splashes of apple cider vinegar are then added - and just a enough water (not much) so all the cukes are barely immersed. Stir and taste the liquid and make sure you like the flavor, then pop them in the fridge until you are ready to eat them. Tastes great right then, even better the next day.

As I took the cuke salad out of the fridge to plate with a grilled piece of salmon with some dilled sour cream over top and a little couscous on the side, I caught the smell of the cukes and onions and sugar and vinegar - such a unique scent! It whisked me back to that small kitchen in Maine and to that dinner table where we'd sit and eat and laugh before Grandma washed all the dishes by hand as we ate dessert.

Grandpa died over 20 years ago and Grandma still lives in that same house in Lisbon Falls. We try to visit her once or twice a year - she doesn't cook anymore so we'll pick up a pizza from down the street and eat it at that small table in the middle of the kitchen and we'll talk and laugh. 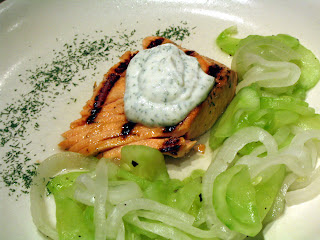 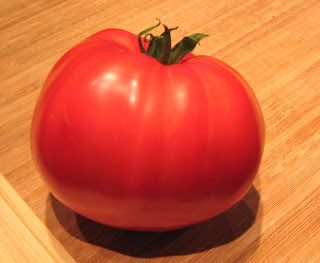 If you plant it... suprisingly it will grow, albeit at an extremely slow pace. We planted a brandywine tomato plant in a 5 gallon bucket and set her on our back deck – plenty of sun. The plant itself grew extremely fast - and to huge proportion - with plenty of flowers and big, sticky leaves. But then the flowers died off soon after and nothing happened. So we waited... And waited. We wondered if we would ever see a tomato – what could we be doing wrong? Perhaps it was the fairly mild summer we were having in Boston – although one day it could be 65 degrees, and the next 90, so perhaps it was the temperature swings that we stunting our pretty little tomato plant.

Then suddenly, there was one tiny little green tomato making its way into the world. It took maybe 2 weeks for it to get up to size and then another 1.5 weeks for it to ripen on the vine. We took it off and let it ripen a bit more on the kitchen counter. And then last night, we could wait no longer. Whatever we were having with dinner, we were going to have a tomato to go along with it! 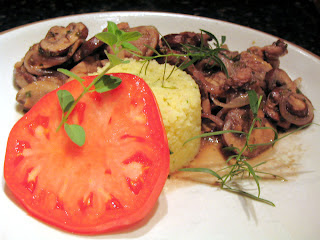 Obviously, the star of the show is Brandywine herself with a touch of kosher salt. Her backup singers were Miss Parmesan Couscous and Mr. Oregano-tarragon Chicken Thighs who happened to be lounging in a red wine mushroom sauce. The dinner was magnificent! We can only wait for the other little green tomatoes to come up – they seem to all be growing faster than our first! 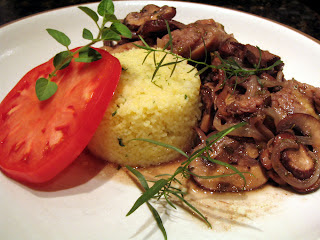 Posted by Boston Chef at 1:56 PM No comments: 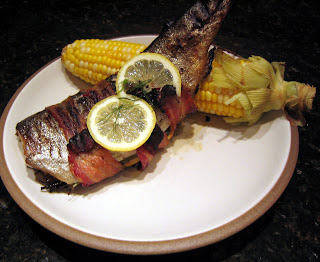 Gearing up for another weekend of camping, hiking, and fishing, we thought an appeal to the Fishing Gods was in order in the form of grilled whole trout. Similar to last year's grilled trout, we bought some cleaned trout and some fresh herbs and a lemon, brought it all home, and warmed up the grill.

We rubbed a thin layer of olive oil inside the trout cavity - and on the outside of the fish - and sprinkled in and out with kosher salt and ground black pepper. Then we added thinly sliced lemon rounds and a stack each of fresh dill and chives. We wrapped our trout in a few pieces of bacon - which will add some smokey flavor and self-baste the fish throughout the grilling process... Grill hot, ready to go! 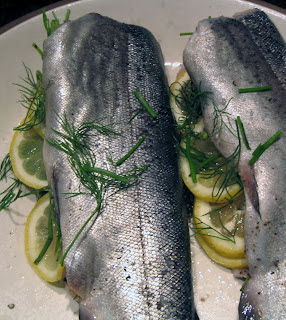 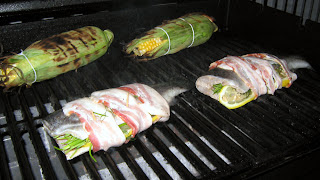 We added the fish to the grill that already contained some soaked corn on the cob (husks peeled back, silk removed, husks replaced, wrapped in string, soaked in cold water for 30 minutes, onto the grill and turned for ~25 minutes) and let those trout go for 10 minutes before flipping and cooking for 10 more minutes. Corn off, fish off, grill off, let's eat! 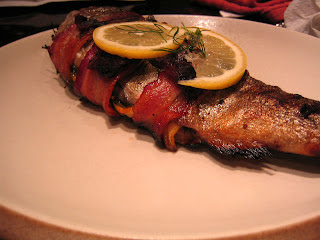 Delicious fish with lots of flavor from the lemon, herbs, and bacon. Comes right off the bones - just pick it off. And grilling the corn is the only way to go - we'll never boil again! Hopefully this meal will bring us luck on the lakes and rivers of New Hampshire this weekend! 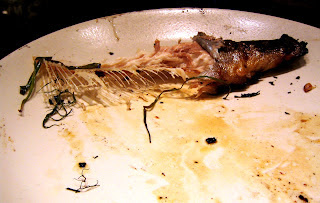 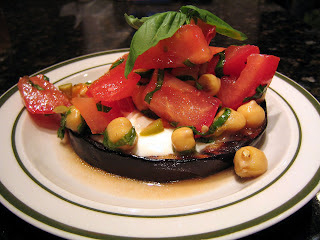 Our basil is out of control this year - which we really don’t mind, but we are always having to find new ways of using it! We were trying to come up with a twist on a Caprese Salad, and we think this did the trick...

We started out by making the salad so that it had at least 30 minutes to chill out in the fridge. Diced 2 medium tomatoes, added 1 16oz can of garbanzo beans, a couple tbsp capers, the juice of 1 lemon, some salt, white pepper, olive oil and a splash of red wine vinegar. Then, out to the deck to harvest about 12 BIG basil leaves which I chopped up and added to my salad. Into the fridge for at least 30 minutes, but the longer the better!

Now on to the base of this dish. We sliced 1 medium eggplant into half inch thick rounds and brushed those rounds with olive oil, and just put some salt on for seasoning. We grilled the eggplant over medium heat for about 5 minutes per side. At the last moment, I placed some sliced fresh mozzarella onto each eggplant round just to get it melting slightly... then off the grill.

A scoop of the tomato salad onto the eggplant and mozz finishes this super simple and yummy sidedish. Personally, I don’t eat the skin of the eggplant, but I keep it on while grilling to hold it together. It’s easy to remove after you have it on your plate - the eggplant "meat" comes right out!

Now we're trying to find ideas for the next basil recipe! 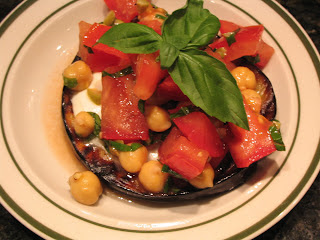 Posted by Boston Chef at 1:17 PM No comments: 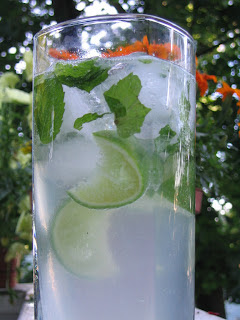 Summertime is in full swing... how about a delicious, refreshing beverage and a light, coastal meal?

I really do love the concept of fresh herbs in drinks... whether you make lemonade with some lemon thyme in it, or perhaps a basil bloody mary martini. This time for me it was the mojito that was calling my name. I really didn’t want to use all that sugar in my drink though since I’m supposed to be following somewhat of a low-carb diet right now. So I just used Splenda instead, and I was quite happy with the results. 1 teaspoon of Splenda, 2 wedges of limes and several mint leaves (more than you think) into a glass which I quasi-muddled with a wooden spoon. I then added ice, some Bacardi and a few splashes of raspberry lime club soda (that’s all I had). It came out refreshing, light and truly summery! 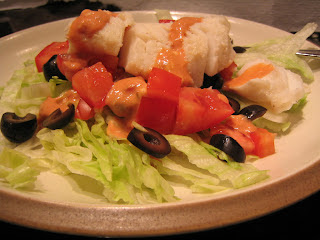 After that, we went for an EASY fish taco salad. Last time we had fish tacos, we included tortillas and beans - this time we decided to go REALLY light and just go with fish and veggies. We marinated a fresh fillet of cod in white wine, lemon pepper seasoning (which includes lemon zest, pepper, salt), and chives for ~30 minutes... then added the fish to a hot grill pan. Maybe 3 minutes on side A, then flipped and after 2 more minutes on side B we were ready to go.

A bed of iceberg lettuce, chopped very ripe tomatoes, and sliced black olives... a couple of BIG chunks of that delicious cod... and top it with our fish taco sauce: 1/2 tartar sauce mixed with 1/2 medium taco sauce. 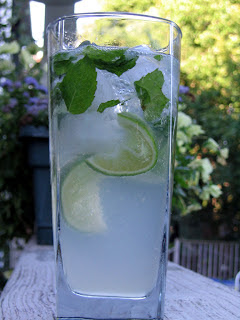 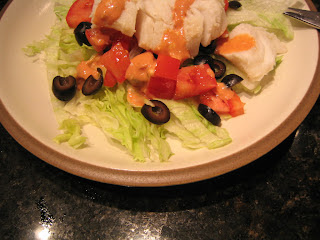