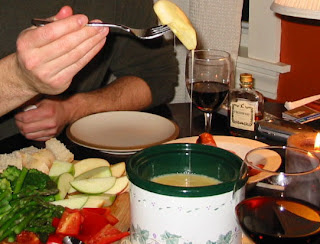 Lots of couples dine out on Valentine’s Day, relishing in the dimly lit, romantic atmosphere of that cute little bistro that just opened up. M and I used to partake in this ritual when we were first dating, and we certianly loved it. But everyone does it, and maybe someday we’ll go back to that old standard, but for now we’ve invented our own Valentine’s Day tradition – fondue.

This is our 4th installment of V-Day fondue, and this time we thought we would try something a bit different. In the past, we usually make our fondue with Emmentaler, Gruyere and Kirsch Brandy which is a dry clear (very potent!) liquor distilled from black cherries! Unfortunately, this year we ran out and none of the liquor stores in the area carried it! What to do?? We saw some fondue recipes on the internet that used cognac instead (and a bit of Dijon!), so I brought home some Hennessey as a substitute.

We rub a warm pan with a garlic clove and then added a cup or so of chardonnay to a simmer and then slowly added our chopped up cheese (this year we went with Gruyere and Gouda…next year we’ll try Emmentaler and smoked Gouda) that we had coated with some corn starch. When the cheese is all melted, we add in some cognac and a tbsp of Dijon. Wisk away until you have a good melted consistency – add more wine if it’s too thick. We then transfer the cheese to a mini crockpot that we can set at the table. 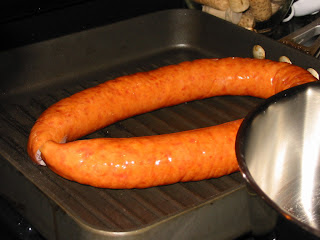 For the accoutrements, we had steamed broccoli and asparagus, red bell pepper, apples, bread and some grilled kielbasa. Another traditional heart day down! 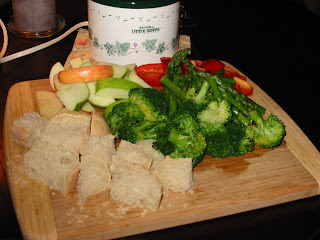 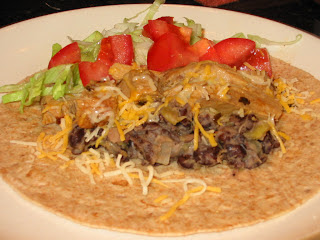 We made a wonderful braised pork shoulder this past weekend, and we knew this 7lb monster (well, maybe 6lbs after all the skin and fat were trimmed) would create a foundation for many weeknight meals to come!

This is such an easy weeknight meal that involves little preparation, and that’s what I like after commuting an hour on the subway to get home after a long day. I started by bringing 3-4 cups of veggie stock to a boil and adding some Mexican oregano, cumin, chili powder, salt and some ground chipotle to it. I then shredded up maybe just-under a pound of leftover pork and threw that in to simmer with the broth and spices for at least 20 minutes, longer if you want! 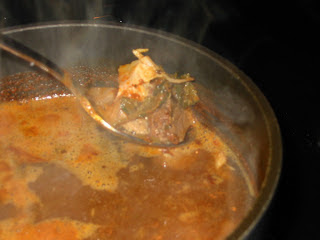 When you feel like you’re ready to eat in about 10 minutes, start a sautee pan over medium heat with a couple tbs olive oil, and add half of a smallish onion that has been chopped, along with some green chiles if you want some heat. Let those cook for about 5 minutes and then add a can of rinsed black beans to the pan. Season with some salt and then after a couple minutes, coarsely mash the beans right in the pan, and let that warm through. 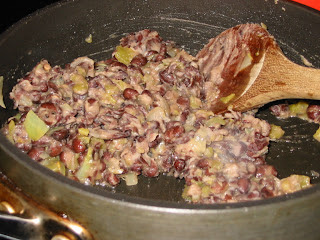 We served our tacos up on some multigrain soft tortillas with some lettuce, tomato, sour cream and salsa. These tacos came out great on the plate, as well as all over the front of my shirt, but oh well! 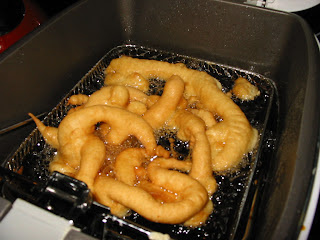 Funnel Cake, Buffalo Wings, and Fried Oysters - must be Super Bowl fare! Since the Patriots had been eliminated, we got to focus on the food on Super Bowl Sunday - and we wanted to do something different. We dug out an old gift we had received a few Christmases ago - an electric fryer - and decided to put it to use. 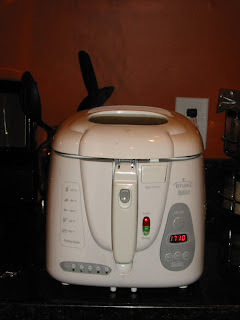 We started with fried oysters. We drained one of those small 1/2-pint containers of oysters and dried them pretty good, then added salt and cayenne pepper to them before rolling them in a mixture of 1/2 white flour and 1/2 corn meal, seasoned with salt and more cayenne. Allowed to sit in the fridge to solidify the "batter", we loaded up our fryer with canola oil and heated it up to 375. Took the oysters back out and it seemed some moisture had broken through the batter, so we panicked a little and rolled them one more time in corn meal before frying them up for about 3 minutes. Despite the extra layer on the outside (that was probably unnecessary) they came out really good! Ate these with some tartar sauce... 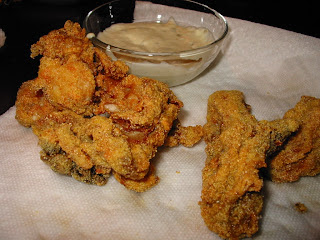 We moved on to Wings by halftime... We air-dried our little chicken parts with some kosher salt on them as long as we could - then we threw them in the 375 oil as-was. After about 8/9 minutes, they were ready to come out (the frying-noises had pretty much stopped). Let them cool for a minute and then tossed them in Buffalo sauce. We had pre-made Frank's buffalo sauce as someone had seemed to buy out all of Stop and Shop's hot sauces - but we've made buffalo sauce before. It's really easy, 1/2 melted butter and 1/2 hot sauce.

We ate these with a big iceberg/cuke/celery salad with blue cheese dressing - dipping the wings in the dressing as well. These came out so good - there is really no substitute for that texture you get from frying the wings instead of baking them. 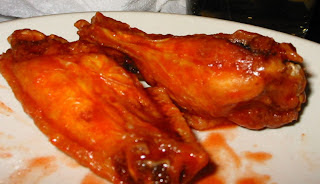 Finally - Funnel Cake! We made a simple batter of white flour, sugar, baking soda, baking powder, egg, milk, and a little salt. We made sure to make it extra liquidy to be able to squeeze it out into the oil. Added the batter to a ziplock bag and cut out the corner and squeezed the batter in - and it CAME TO LIFE! It was fun to watch these cook, after a minute or two we used tongs to flip them over. Out they came for a pat-dry, then we added some powdered sugar.

So good! None of the flavors from the other foods are transferred, as we feared. We ate these cakes warm with a little iced cream... DELICIOUS!