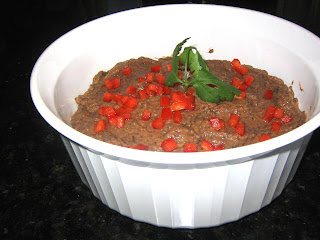 Sautee 1 small to medium diced onion and one diced red bell pepper in 1 tbsp olive oil. Reserve 1 tsp of the uncooked red pepper and dice even finer for the garnish. Sweat the veggies for 10 minutes and then add 2-3 cloves of minced garlic and more oil if needed. Sautee for 5 more minutes.

While veggies cook, place the following in a food processor:

Give those items a whirr, then add the cooked veggies and puree until smooth with some S&P. You may have to add a drizzle of olive oil and more citrus and more spices but it depends on your palate. Garnish with the reserved pepper and a sprig of cilantro. Refrigerate for 2 hrs and serve with tortilla or pita chips! 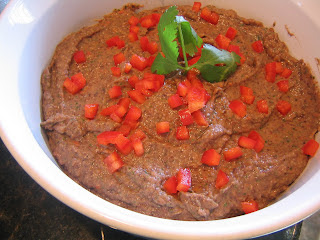 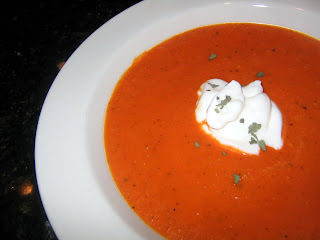 Let's hear it for another installment of blended soups!! As you know, we're trying to hit all the colors of the rainbow, and red was on our list today! The intent for the soup was for the peppers to have the starring role, but I added one too many tomatoes to the pot! And these San Marzano plum tomatoes have such a wonderful intense flavor that it masked some of that bell pepper taste. With that being said, it was still a pretty kick butt soup!

As with all my soups, I started out sweating 1 diced onion, 3 sliced carrots and 3 ribs of celery in some olive oil and 2 tbsp butter. Let that sweat over lowish heat for 15 minutes, then add a few cloves of minced garlic. I had intended on roasting fresh red peppers, but they didn't look so hot at the store, but I lucked out in finding a 32oz jar of fire-roasted red peppers which looked better, were already roasted and were no more expensive than the fresh ones. I roughly chopped up those and into the pot they went. I opened up a 32 oz can of those wonderful San Marzano tomatoes, and put in about 2/3 the can with juice. Trust me, the soup was great, but perhaps only add 1/4 to 1/3 the can if you want the peppers to shine. 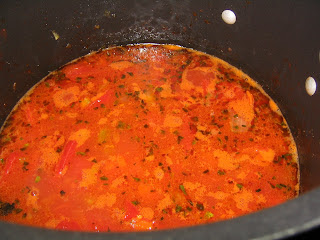 After a few minutes warming through, I added chicken stock to the top of the veggies, some S&P and a few tsp dried basil. That's it! Let it simmer for 15 minutes until all veggies are soft, reseason if necessary, and perhaps add a bit of butter to smooth out the flavor. Blend away and of course add more stock if it's too thick! 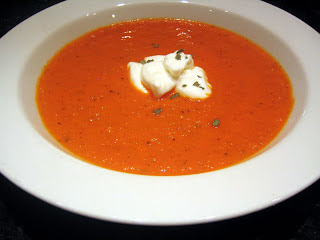 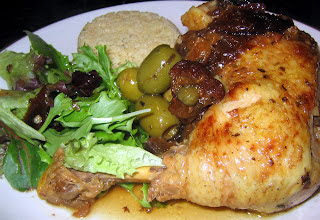 M of course was skeptical as to the prune section of this recipe. Prunes do get a bad rap, but it was my duty to prove to M that they are not only edible, but delicious.

We started off by browning thighs and legs in some olive oil, only seasoned with some S&P. After they were browned on both sides, we transferred them to our Dutch oven along with: 12oz dried pitted prunes chopped in half, 1/3 cup capers with juice, 12oz green olives, a few tbsp of brown sugar, some fresh thyme, oregano and a bay leaf. 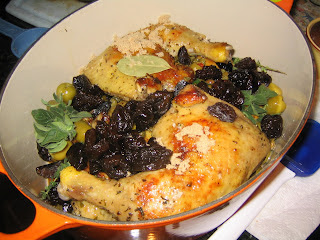 We then added a few cups of chicken stock, put the cover on the pot, and put it into a 350 degree oven for about an hour. We gave it a stir about halfway through the cooking process to make sure that everyone had equal time under liquid.

I probably could've added a tad more brown sugar, but I wouldn't have changed anything else! We served it with some whole wheat couscous and a field green salad that we dressed with some of the sauce. The dish was sweet and salty and briny and made M, maybe not a prune lover, but definitely a liker! 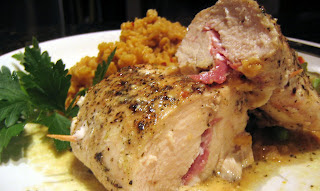 Simple cooking techniques can make you look like a pro at your next dinner party, and it helps if you have not only the know-how, but the right tools as well. Bostonchef #1 received a 13" All-Clad French skillet for Christmas from Bostonchef#2, however, #2 knew that he would try to claim it for himself. Very sneaky Xmas buying if you ask me!

Our cookware was either nonstick or enameled cast iron, so we desperately wanted a pan that we could sear meat on and get some nice browning to occur. This one fit the bill, and it has nice sloped sides which make it easy to flip stuff.

We've made variations of this dish several times, and it hasn't failed us yet. Butterfly your chicken breasts by placing the fat side of the breast facing your knife and then slice through the breast without going through all the way so that it opens like a book. Hope that makes sense! Put a thinly sliced piece of prosciutto (or ham!) inside with a couple slices of edam cheese (or fontina or cheddar!). Fold the chicken back up and secure with a couple of toothpicks. We seasoned the outside with some Penzey's Lemon Pepper and their salt-free Tuscan Sunset. Preheat your oven to 400F. 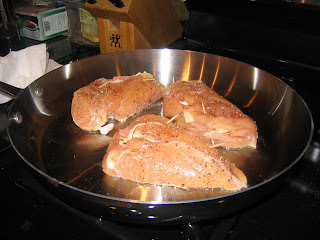 Heat your skillet up and add a couple of tbsp olive oil to the pan. Brown the chicken on both sides, probably about 5 minutes per side. Finish the chicken off in the oven about 10-20 minutes until the chicken is cooked through but not dry!

Remove chicken from the pan, and put the pan back on the cooktop with a couple of splashes of white wine, 1 tbsp dijon and 1/2 cup chicken stock. Reduce on high heat and scrape up all that browned goodness from the chicken. Serve the pan sauce over the stuffed chicken breasts...add some rice and veggies and your meal is complete! And here's #2 with his new apron...he's a messy cook, folks...several shirts have been ruined due to his chaotic cooking technique!