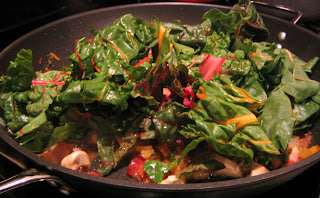 When my Mom told me that her vegetable garden started sprouting, it reminded me of my childhood when that garden seemed like a vast forest to me. I could get lost in the corn and tomato plants, dig for worms, and eat peas right out of the pod. While recently visiting my parents, I remarked to my father that the garden used to seem so much bigger to me when I was 5 than it does now, as do most things (snowbanks, adults, bumblebees). And then he said, “Don’t tell your mother, but I have been making it smaller and smaller over the years by letting the grass grow in a bit closer each season. It’s easier to take care of, and we always have too much as it is.” So it really was smaller now, but my memories haven’t faded one bit. Especially when it comes to greens. Swiss chard was one of my favorites even when it was boiled beyond belief as many Acadians of that time prepared the chard. I prefer wilting it as I do with spinach, and I think even my Mom would like my version!

Separate the stems from the leaves and slice the stems up. I prefer using my big paella pan so I have lots of room to work in…I added about 2 tbs olive oil to the pan and then the sliced stems. After sautéing for a couple minutes, I added about ¼ cup of raisins and half a cup of chicken broth and a few red pepper flakes with the cover on. After 5 more minutes, I removed the cover, added about 6 quartered mushrooms, a dash of nutmeg, some salt and some Penzey’s garlic powder. After a few more minutes, I added the chopped chard leaves along with 6 chopped basil leaves and then covered the pan and let wilt for 5 more minutes.

I just love how the raisins plump up and cancel out any bitterness in the greens! For next time, I may add some olives for some briny flavor as well! 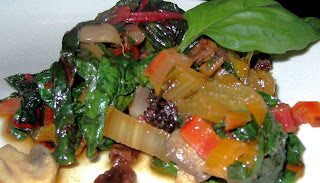 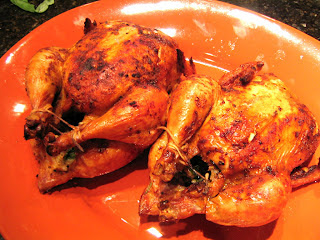 Exactly like the title says - twin whole chickens, roasted on the grill. Why not? We try to avoid running the oven for long periods of time during the summer, so we're grilling everything. This time, we wanted to make something that would stretch a few nights (and would be inexpensive, as well) so we spotted these twin-packs of ~4.5lb chickens on sale for $.99/pound! SOLD!

We determined right away that we'd try roasting them whole on the grill at the same time, using the outer burners to maintain the 350-degree temp and leaving the middle burner - over which the chickens would sit - turned off. Like most grills, ours has a thermometer that we'd be monitoring closely and adjusting those burners accordingly. Other than that, we'd treat it just like any other roasted chicken.

So.... we brined them overnight in a solution of water, salt, sugar, bay leaves, spices, hot sauce, and soy sauce. About an hour before they were to meet the grill, we took them out and rinsed them down and threw them back in the fridge. Shortly after, we went out to preheat the grill and grabbed a bunch of fresh herbs from the back deck - basil, tarragon, rosemary, lavender, and oregano are all growing happily out there. 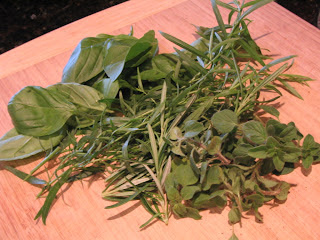 Finally ready to go, we melted some butter and pulled the chickens out. Salt and pepper the inside and stuffed a big handful of herbs in each, then tied the legs together. Brushed on some melted butter on the outside and added the final spices - salt and pepper and smoked paprika - to the outer skin.

Grill at about 400, we popped the two chickens on (can't believe we didn't take pics of them on the grill! next time..) and shut that grill up. We could hear the skin popping and crackling as soon as they hit the hot grates! The temperature immediatly dropped to about 360, so we let that go. At about 4.5 lbs each, we'd be looking at 1.5 hours but we'd start checking the temp at 1 hour.

An hour later we opened the cover for the first time and they were happily cooking away! Took the temp and it seemed that we'd be on schedule for that 1.5 hours... sure enough, a half-hour later, all temp readings came back "ready" and the twins came off to sit under some foil for a resting period.

The chicken came out wonderfully... perfectly cooked, not uneven at all, some grilled flavor but not overly smokey, just juicy and flavorful! To accompany our twin birds (we only ate part of one, and have lots leftover!) we made a ratatouille with eggplant, tomatoes, onions, green pepper, tossed with some olive oil, dried thyme and basil, salt and pepper - and roasted that in a 400-degree oven for ~45 minutes. Delicious! 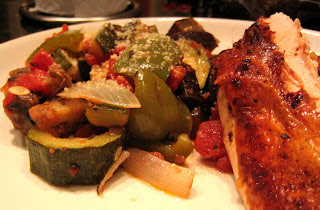 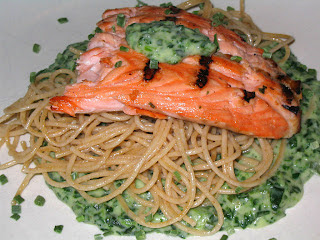 What do you get when you mix 2 cups of cooked spinach with 1 cup of alfredo, lots of garlic and a handful of whole wheat pasta? A super bed of yummy goodness on which to rest a nice piece of grilled salmon of course!

We simply marinated a couple of salmon filets in white wine, chopped chives, and some salt for about 30 minutes, and then grilled them to perfection on a hot grill for 4 minutes on each side. To plate, make a thick pool of your creamed spinach mixture, top with a bit of whole wheat angel hair pasta, and set the cooked salmon on top. Super easy dish to make (especially for a crowd!!)

We’re off to go fishing again this weekend, but this time up in New Hampshire. Hopefully we’ll catch something to put on our table!