Every St. Valentine's Day, we celebrate together by making fondue. Here are some pics from our latest attempt - we used Emmenthaler and Gruyere cheeses. Next year we'll try some Gouda. There is a great cheese store in our old neighborhood called Formaggio... it is a fun food store with ridiculously good cheeses, chocolates, and spices. 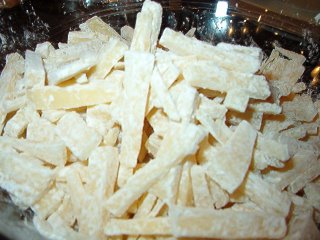 Melting cheese! After rubbing the pot with a big garlic clove, we got some chardonnay up to temperature and then added the cheese, little by little... 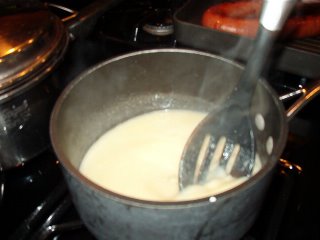 Our Valentine's Table, complete with Kirsch to dip our loaf of crusty wheat bread in... The cheese is going from the stove top into that little crock pot. 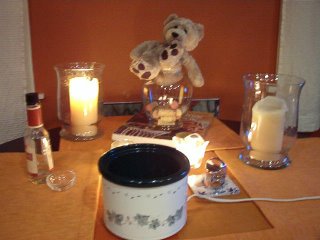 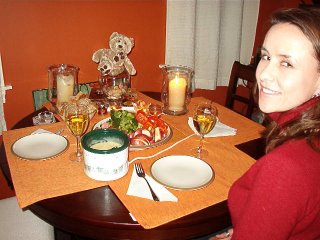 Here are a couple of pictures we had from fondue on Valentine's Day '03 - three years, a different house, a marriage, and one much-needed haircut ago!!! 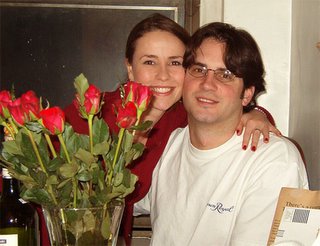 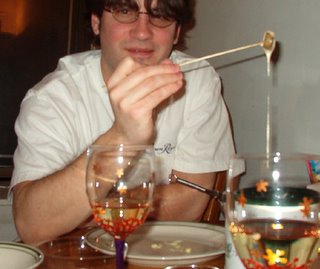 As you can tell from previous posts, we watch what we eat in an avoid-processed-sugar-or-flour fashion... so we only eat whole wheat pasta. Obviously, this fact makes it tough to make lasagna with big, broad sheets of pasta - but we still love the steamy goodness of a big plate of sauce and cheese and filling pulled straight out of the oven and the wonderfully delicious leftovers that come as a reward for all the work. So what can we do for filling that is not pasta? Why, eggplant, of course!

To drain the bitterness out of the eggplant, we slice 2 big eggplants up (the round way, not lengthwise) and layer them in a colander with generous amounts of salt on each layer. We put that colander in a big glass bowl and cover the layers of eggplant with a sheet of plastic and another bowl that is heavily weighed down. Leave that in the fridge for a few hours and you'll see the liquid draining to the bottom, taking some of that bitterness with it.

Next step is to fry those eggplant slices up. We do an easy assembly line of rinse eggplant slice, pat dry, BARELY dust with wheat flour, egg wash, breadcrumbs, into a big pan with about 1/2" of canola oil.

Fry those bad boys up for about 3 min/side and set on a paper towel-lined plate. 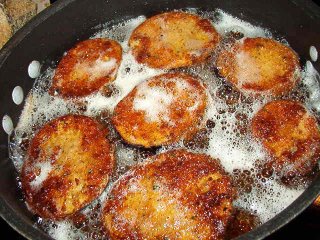 At the same time, we made our sauce. See Our Meat Sauce entry - we make it basically the same as this for our "eggie parm." 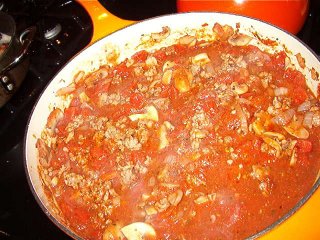 Other ingredients - fresh basil and fresh and shredded mozzarella. 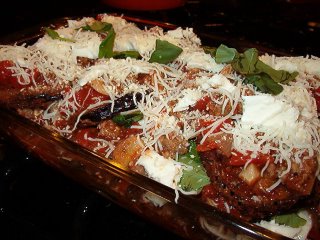 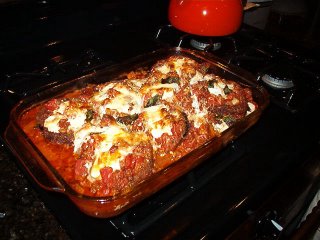 Score: Eggplant Parm.. 10! The big one-oh! 1000000!!! No bitterness, so tender, the eggplant. Fresh basil and mozz give a wonderful FRESH flavor... sausage in the sauce makes everything perfect.

Leftovers: 0! The disaster we alluded to from our last post - we left that whole big platter of de-bittered, fried eggplant, sauce, and baked goodness out OVERNIGHT... no leftovers for us, the remainder after dinner when in the garbage the next day. So, we shed a tear and move on...

What was, and could have been again: 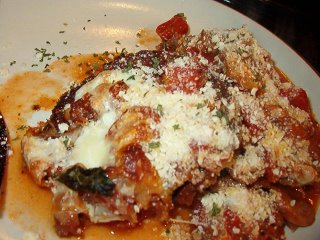 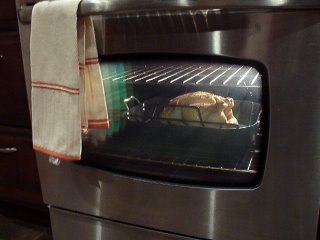 
Thousands of words have been written about how Roasted Chicken is the most wonderfully delicious and easy dinner to make in the history of mankind. Who are we to argue?

We go simple: 5lb "oven stuffer roaster" Chicken, rinsed inside and out and then paper towel dried (be sure to remove the innards and either keep for cooking later or throw away!), generous salt and pepper inside the chicken, then whole, peeled garlic cloves and quartered lemons are stuffed in and we tie up the legs to keep the garlic/lemon inside. Then, generous salt and pepper all over the outside, layer of melted butter brushed on all over the outside, another layer of salt and pepper, another layer of butter and then try and coerce any leftover butter into the small hole left in the cavity if you can. Why the layers on the outside? OCD might be one reason... but it is really just to ensure thorough seasoning.

375 oven for 1.75 hours until internal thigh temp of 180. Then out and cover with aluminum until ready to eat!

We threw some cubed, seasoned sweet potatoes into the oven as the chicken was coming out - they were in for about 20 minutes, basically as long as we needed to wait for the chicken to settle and be carved. 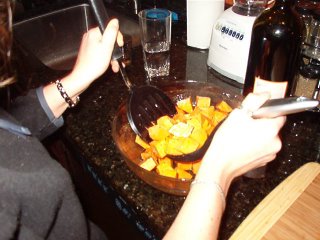 We also bought some big, beautiful, leafy red swiss chard and sautéed that for five minutes or so with garlic and chopped olives in olive oil on the stove top as our final side dish. Woulda thrown some raisins in, but we were out! 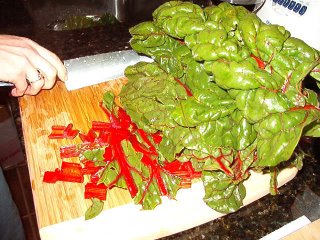 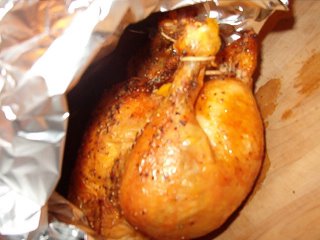 Served all together, made a terrific dinner and some great leftovers! 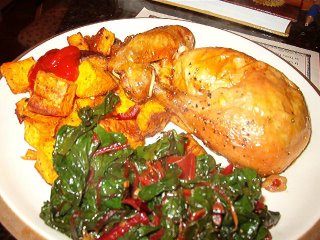 When we last joined you from Orange Kitchen (our version of Kitchen Stadium), we had successfully implemented our new wok's capabilities to construct a wonderful Shrimp Stir Fry. Knowing we like to stretch some of the work we do to a second meal, we made plenty of extra (brown) rice for our stir fry and made sure to pick up some pre-marinated Chinese BBQ Pork from the S&S butcher. Earlier in the day, we roasted those pork strips at 300 degrees for about 45 minutes, then covered them and transferred them to the fridge. The stage is set... for Pork Fried Rice!

This was an easy one, no doubt - but with deliciously complex results and wonderful leftovers for a quick bite the next day. We've all had Pork Fried Rice from the local paper-box delivery, so use that imagery to select the sizes of your cuts of: onion, celery, and the roasted pork. We had no waterchestnuts :( so we used a can of baby corn that's been sitting in the back of the pantry for a while - cut those little guys up as well, get the leftover rice out of the fridge, and we're ready to go! 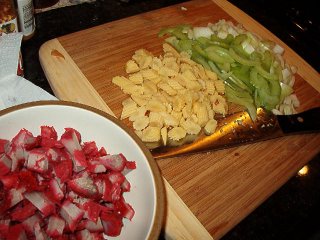 WAIT! Not ready yet! "Too much rice and meat! Not enough greens," she cried! So we defrosted some large cuts of broccoli and decided to sauté those up as a side dish to our PFR (Pork Fried Rice). Throw the same Asian "rub" in with some Can-oil in the wok and toss the broccoli around for about 6 minutes (high heat!) and set those guys aside... 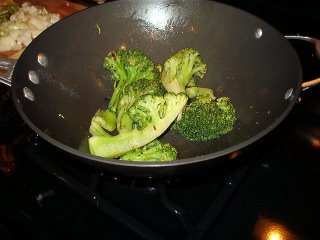 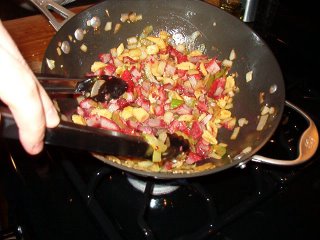 When we're ready (we're ready!) scoop about two or three cups of that cooked rice in and fold it in there. At the same time, get the all-important sauce ready - 2 eggs slightly beaten and stir in a few tbls of soy sauce and some red pepper flake.

When we're ready (we're READY already!) pour that sauce over and quickly fold in to the whole mixture. You'll see the egg quickly cooking and really pulling everything together. One more minute and when we're ready (not going to say it again!!!) plate a big ol' scoop of that with the broccoli... we're now finally ready to eat! 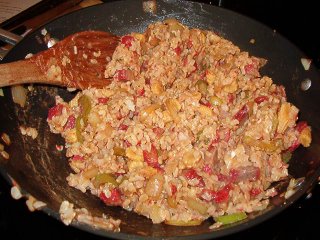 We popped in a movie and sat on the floor with our PFR and a glass of pinot noir and enjoyed!

Score: 9 out of 10! So tasty, not like delivery PFR - different and more just-cooked tasting (obviously).

TOLD you we'd use the wok! We whipped up a very tasty shrimp stir fry last night... easy-peel shrimps were on sale for just $5.99/lb at S&S so we grabbed 2/3lb of those guys, a bunch of veggies, started some water and we were on our way!

The rice takes about and hour to cook - 5 cups of chicken stock and 2 cups of rice to a boil, then cover and simmer for 50 minutes - so that gets going as we set to peeling the shrimp.

We made a "rub" of crushed red pepper flakes, salt, and chinese 5-spice. The Chinese 5-Spice has a great asian flavor... just what ARE those five spices? Why ground cinnamon, fennel, star anise, cloves, and Szechwan pepper! Great combo. 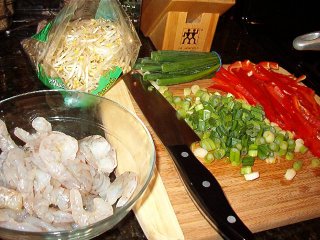 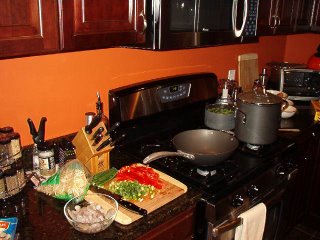 We tossed the shrimp in some of the rub (saving some for the veggies and for the final sauce that the entire combo will be finished with) and set to cooking them. We kept the wok over nice high/medium-high heat and cooked with Can-oil... stirring most of the time. Probably 4 minutes, shrimp come out! 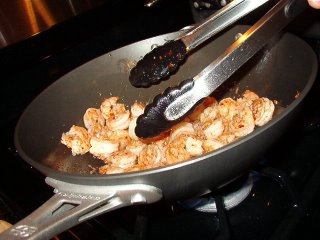 We did the veggies in stages to make sure they had enough coverage in the wok. We par boiled the green beans to give them a head-start in a little pan, probably about 10 minutes in boiling water. Red peppers went in to the now-nicely seasoned (from the shrimp) wok with a little rub over the top - toss toss cook cook done! Remove to a big glass bowl. Then the green beans (previously par boiled) - same procedure! Then the scallions and mushrooms... and the bean sprouts. Toss toss cook cook awesome! 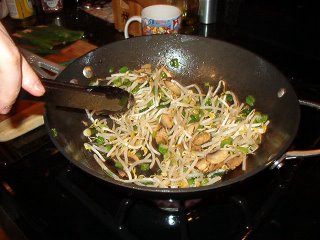 Throw the reserved veggies and the shrimp back in. Using the remainder of the rub to make a sauce, we added a little flour, soy sauce, and rice wine vinegar and stirred furiously until it was a nice consitency. Pour that in (only a couple tbls) and toss toss cook cook DONE! 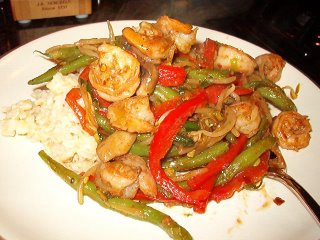 SCORE: Stir fry - we're going with an 8.5 out of a 10 on this one... the shrimp were so plump and delicious and the veggie combo is perfect. A LITTLE too much salt ended up going in and the rice stayed in the water about 3 minutes too long, preventing the 10.

Tonight we'll take the leftover rice that we made (that's why we made so much!) and some chinese bbq pork and make Pork Fried Rice! Stay tuned for that one next...
Posted by Boston Chef at 11:39 AM No comments:

Let’s try our hand at appetizers! We’ve been invited to a neighborhood post-holiday party and since our last name is in the beginning of the alphabet, we were assigned an appetizer. Boston Chef #2 and I found a couple of grand sounding recipes on foodtv.com – walnut and blue cheese grapes and tapenade stuffed cherry tomatoes. Unfortunately Boston Chef #1 (that’s me) was running late that day and didn’t make it to the grocery store until 2 hours before go time. So the scores we give these dishes are lower than what we would’ve given them had they more time to chill out in the fridge. (We had some leftover which indeed tasted better the next day).

Walnut and Blue Cheese Grapes
Chop up about 2/3 cup walnuts pretty finely and then toast those at 325F for 8-10 minutes.

Using a hand mixer (which Boston Chef#1 is scared of due to an incident involving a 40 year old mixer that liked to stealthily start by itself especially when my fingers were nearby) or a food processor, mix 6oz Gorgonzola with 4 oz lite cream cheese until smooth.

Now here comes the EXTREMELY messy part. Pull up yer sleeves!! Make sure your red or black seedless grapes are washed and dried. Put ~1tbs cheese mixture in your hand and glop around the grape. Don’t worry about the prettiness factor at this point, trust me! Put grapes on sheet pan and refrigerate for 30 minutes or longer. Then roll those suckers in the nuts and put them in the fridge again for at least 15 minutes.

Remove and slice in half and you get little apps that strangely resemble eyeballs. Maybe a good app for a spooky Halloween party?!?

Score: 5.5 out of 10 the night of, but after an overnight chill, score goes up to a 6.5. Definitely chop walnuts finer than you think. 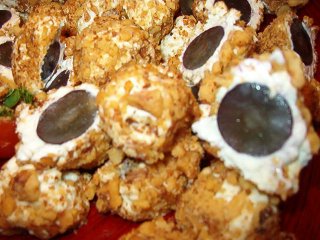 Cut a little sliver off the bottoms of about 30 tomatoes so they’ll stand up, and then cut of the top about ¼ way down and hollow them out.

This is actually supposed to be a Spanish tapenade using Spanish Brandy, but heck, I’m just buying a nip and I doubt they had froufrou Spanish brandy in the nip/tuck size.

Spoon into the tomatoes, garnish with fresh chopped parsley and refrigerate! 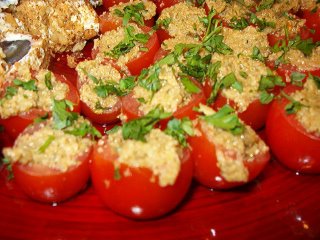 A bit too salty, but that mellowed the next day. Definitely throw in a garlic clove (maybe 2 depending on the size of them, and maybe fewer capers. 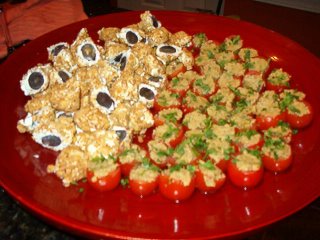 Posted by Boston Chef at 4:49 PM No comments: